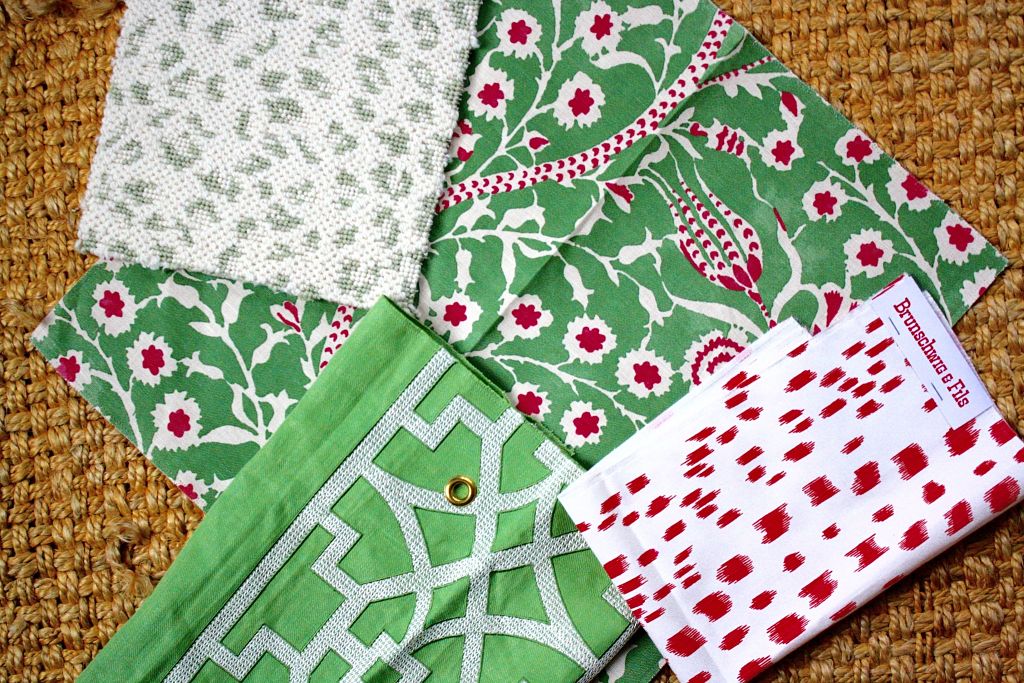 Perhaps it’s because I’m a mom of two little boys and I’ve never properly satisfied my appetite for Lilly Pulitzer, but when I was faced with dressing a jewel-box of a guest bedroom I felt an undeniable tug to clad the room in pink and green. Or maybe it’s just because it’s mid-winter here New York and I needed a little Palm Beach heat… Either way, Florida was calling.

After settling on a palette, I ended up waffling on fabric choices for several weeks. There were so many options to sort through – Schumacher’s Imperial Trellis in Lacquer was tacked up on my moodboard for a long stretch, as was GP&J Baker’s Imperial Pheasant. Then I considered softening the pink and green scheme and going with John Robshaw’s Prasana paired with Schumacher’s Garden of Persia.

This tropical bedroom spotted on Little Green Notebook was also hanging out on the wall for a hot minute.

As is so often the case, ultimately it was the rug that informed the fabric. I was browsing Stark’s Warehouse Sale in search of a Sisal runner when I came across their spring-green Namir (first image, top left): a beautifully subtle print that packed just the right amount of animal magnetism while complementing the high-gloss celadon walls.

After purchasing the rug, it became clear that a few Brunschwig’s pink Les Touches throw pillows would make the perfect partners to the rug’s soft leopard spots. I’d perch the pillows atop Mary MacDonald’s Don’t Fret in Lettuce, which adds a little Regency charm to the window seat. Hill Brown’s vibrant Cannanore fabric brings it all home – adding another dimension to the pattern play while tying in the color palette. I’ll be using this fabric on a pair of drapes and an oversize roman shade.

Here’s a progress shot of the lovely little reading nook thus far, though the room is far from finished.

I’m also currently contemplating a cornice box – this style is calling to me – and going whole-hog with an ultra-preppy embroidered monogram. Now if only the room came with a plane ticket to somewhere balmy…

A lifestyle magazine writer by trade, Mariel swapped her laptop for a hardhat after spending four years (and counting) renovating turn-of-the-century homes in Westchester, NY.

Cultivating timeless interiors that are classic, colorful and eclectic

Learn more about who we are and what we offer, or contact us to set up a consultation.